‘When pressure is applied anywhere to an enclosed fluid, it is transmitted uniformly in all directions’

Using a mercury barometer, Pascal proved this on the summit of the 1200m high Puy de Dome in 1647. His studies in this area led to the development of PASCAL’S PRINCIPLE, the law that has practical applications in devices such as the car jack and hydraulic brakes. This is because the small force created by moving a lever such as the jacking handle in a sizable sweep equates to a large amount of pressure sufficient to move the jack head a few centimetres.
The unit of pressure is now termed the pascal.

‘The study of the likelihood of an event’

Chance is something that happens in an unpredictable way. Probability is the mathematical concept that deals with the chances of an event happening.

The computer language Pascal is named in recognition of his invention in 1644 of a mechanical calculating machine that could add and subtract.

Like many of his contemporaries, Pascal did not separate philosophy from science; in his book ‘Pensees’ he applies his mathematical probability theory to the problem of the existence of God. In the absence of evidence for or against God’s existence, says Pascal, the wise man will choose to believe, since if he is correct he will gain his reward, and if he is incorrect he stands to lose nothing.

‘A machine which had a separate store for holding numbers (memory) and a ‘mill’ for working on them (arithmetic unit). The machine used a punched card system for specifying the sequence of instructions (input) and for obtaining results (output)’

In 1823 the mathematician and inventor Babbage was driven to attempt to build a mechanical solution to the alternative of books of mathematical tables written by teams of number crunchers to help with complicated calculations. Due to human error they were inevitably prone to mistakes. Babbage was a champion of machines and the scientific approach – he believed that if a mechanical solution could be devised then accuracy would always be assured.

Babbage designed three difference engines – mechanical devices that would compute and print mathematical and navigational tables – but never built one.

The machines were designed for mathematical calculations only.

Each number in the difference engine was represented by a column of cogwheels, and each cogwheel was marked with digits from 0 to 9. A number was set by turning the cogwheels in the column to show the right digit on each. The working model had seven number columns, each of sixteen digit cogwheels or digits. Babbage separated out the addition process from the ‘carry over’ process. The ‘mill’ (central processing unit) performed various arithmetical operations, the ‘store’ (memory) held numbers. Results from the mill were returned to the store after processing.

He also designed an analytical engine, the first programmable computer. It was much more than a calculator, rather an all-purpose computing machine. His design envisaged ‘programs’ written using loops of punched cards inspired by the Jacquard Loom. It included a reader able to process the instructions they contained, a ‘memory’, which could store the results, ‘sequential control’, and other logical features that would become components of twentieth century computers. 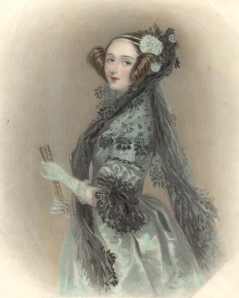 ‘It has no pretensions whatever to originate anything, but it can do whatever we know how to order it to perform’ wrote Lovelace about the analytical engine. Lovelace, a mathematician, is acknowledged by many as the world’s first computer programmer. Daughter of the poet Lord Byron, Lovelace worked closely with Babbage in writing instructions for his difference and analytical engines. Her writings provide the first descriptions of programming techniques. She died of cancer aged 36.

The public perception was of a ‘white elephant’. The Prime Minister Robert Peel is said to have commented that perhaps Babbage’s machine ‘should be used to calculate the time at which it would be of any use’.

Although Babbage prepared detailed drawings for thousands of parts, only a few parts were built. His project was ahead of its time and Victorian technology could not provide the precisely machined components required.

The need to develop technology as he went along meant that progress was slow and after ten years only half the parts had been made. Human computers and printed tables remained a cheaper, more practical option. One spin-off from the project, however, was the development of the first standardized screw system by Joseph Whitworth, which revolutionised engineering. 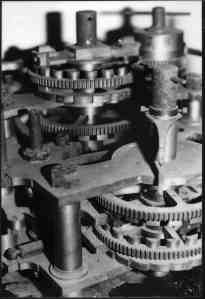 In 1991, the two-hundredth anniversary of Babbage’s birth, Doran Swade and his team at the British Science museum built the difference engine number 2 (designed between 1847 and 1849). The calculation section of the engine weighs 2.6 tonnes and consists of 2400 parts.

Boole’s reasoning founded a new branch of mathematics. Boolean logic allows two or more results to be combined into a single outcome. This lies at the centre of microelectronics. 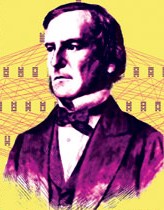 Boolean algebra has three main logical operations: NOT, AND, OR.
In NOT, for example, output is always the reverse of input. Thus NOT changes 1 to 0 and 0 to 1.

Boole’s first book ‘Mathematical Analysis of Logic’ was published in 1847 and presented the idea that logic was better handled by mathematics than metaphysics. His masterpiece ‘An Investigation into the Laws of Thought’ which laid the foundations of Boolean algebra was published in 1854.

Unhindered by previously determined systems of logic, Boole argued there was a close analogy between algebraic symbols and symbols that represent logical interactions. He also showed that you could separate symbols of quality from those of operation.

His system of analysis allowed processes to be broken up into a series of individual small steps, each involving some proposition that is either true or false.
At its simplest, take two proposals at a time and link them with an operator. By adding many steps, Boolean algebra can form complex decision trees that produce logical outcomes from a series of previously unrelated inputs.

‘A theoretical computer with two or more possible states; which can react to an input to produce an output’

Turing conceived the idea of a universal machine that employed an algorithm to solve a problem, writing the algorithm as a set of instructions using a standard code.

In 1950 Turing suggested that it must be possible to program computers to acquire human intelligence and devised the test suggesting that if the response from a computer is indistinguishable from that of a human, the computer could be said to be intelligent. 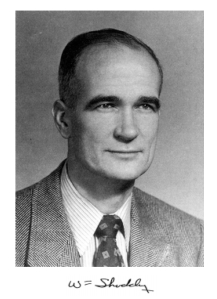 Shockley was a member of the team at Bell Laboratories investigating the properties of electricity conducting crystals, focusing in particular on germanium.
This research led to the development of the junction transistor, virtually invalidating the vacuüm tube overnight. 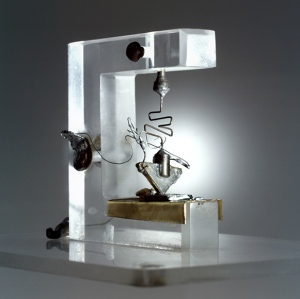 The transistor was developed in 1947 as a replacement for bulky vacuum tubes and mechanical relays. The invention revolutionized the world of electronics and became the basic building block upon which all modern computer technology rests.
In 1956, Bell Labs scientists William Shockley, John Bardeen and Walter Brattain shared the Nobel Prize in Physics for the transistor.

Shockley also founded Shockley Semiconductor in Mountain View, California — one of the first high-tech companies in what would later become known as Silicon Valley.

In 1965, one of the founders of chipmaker Intel observed the exponential growth in the number of transistors per silicon chip and made his prediction which is now generally referred to as Moore’s law. 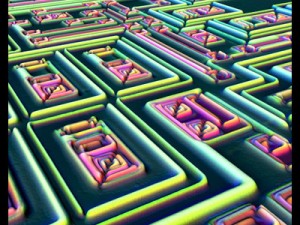 In the 1980s Berners-Lee, while working at CERN, the joint European particle physics lab in Geneva, developed a simple programming language that he called HTML, or Hypertext Markup Language. HTML contains simple codes

( this text has <strong>bold</strong> formatting )

that are used to format text and include graphics, audio and video. He also designed HTTP, or Hypertext Transfer Protocol, to move files across the internet and a system of addresses ( URLs, or Uniform Resource Locators ) to find files on the internet.

Tim Berners-Lee on 25 Years of the Web