Hand-held block printing – a laborious process of carving whole pages of fixed text out of wooden slabs and reproducing copies using dies – had been used for many decades before the German inventor appeared. What Gutenberg mastered was the idea of placing individual metal letters – (his family background was in minting and metalworking, an ideal foundation for his training as an engraver and goldsmith. His skills enabled him to craft the first individual metal letter moulds) – into temporary mounts, which could then be dismantled or ‘moved’ once a page of text had been completed and reused to produce other pages.

In comparison to engraving and the single use of wooden blocks, the theoretically infinite number of sides which could be made out of a set of metal characters, together with the speed at which a template could be created, revolutionised printing and the spread of the printed word. 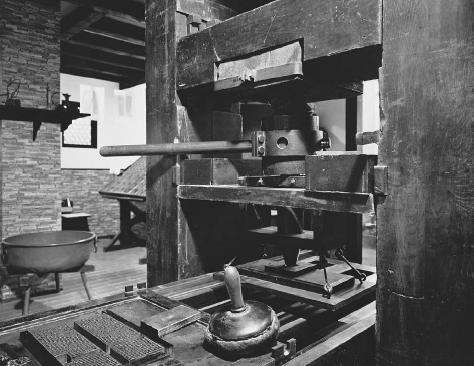 Some sources credit the Chinese with inventing moveable type printing, using characters made of wood. What is notable is the quality of Gutenberg’s metal casts and press – they are almost as important as the idea of moveable type itself.

By the end of the fifteenth century tens of thousands of books and pamphlets were already in existence, giving academics the opportunity to share scientific knowledge widely and cheaply.