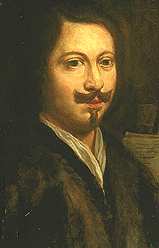 ‘Together with VINCENZO VIVIANI (1622-1703) realised that the weight of air pushing on a reservoir of mercury can force the liquid to rise into a tube that contains no air; that is, a vacuüm’

In 1650 OTTO VON GUERICKE (1602-1686) invented an air pump and showed that if you remove the air from the centre of two hemispheres that are resting together, the pressure of the outside air is sufficient to prevent a team of horses from pulling them apart.

1657 – Formed the Accademia del Cimento with eight other Florentines to build their own apparatus and conduct experiments to advance the pursuit of knowledge. Disbanded after ten years as a condition of its patron Leopoldo de Medici’s appointment as cardinal, its dissolution followed Galileo’s trial by the Catholic Church and marked the decline of free scientific research in Italy. 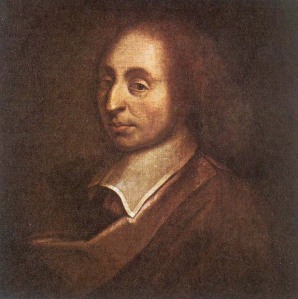 ‘When pressure is applied anywhere to an enclosed fluid, it is transmitted uniformly in all directions’

Using a mercury barometer, Pascal proved this on the summit of the 1200m high Puy de Dome in 1647. His studies in this area led to the development of PASCAL’S PRINCIPLE, the law that has practical applications in devices such as the car jack and hydraulic brakes. This is because the small force created by moving a lever such as the jacking handle in a sizable sweep equates to a large amount of pressure sufficient to move the jack head a few centimetres.
The unit of pressure is now termed the pascal.

‘The study of the likelihood of an event’

Chance is something that happens in an unpredictable way. Probability is the mathematical concept that deals with the chances of an event happening.

The computer language Pascal is named in recognition of his invention in 1644 of a mechanical calculating machine that could add and subtract.

Like many of his contemporaries, Pascal did not separate philosophy from science; in his book ‘Pensees’ he applies his mathematical probability theory to the problem of the existence of God. In the absence of evidence for or against God’s existence, says Pascal, the wise man will choose to believe, since if he is correct he will gain his reward, and if he is incorrect he stands to lose nothing.