‘Gilbert’s principal area of study related to magnetism, however, his method of enquiry is equally significant’

Gilbert rejected the scholastics’ approach to science, preferring the experimental method, which he applied to the Earth’s magnetic properties.
He carried out some of the first systematic studies of the lodestone in Europe and showed that the Earth acts as a bar magnet with magnetic poles.

His celebrated text, ‘De magnete, magnetisque corporibus, et de magno magnete tellure‘ (On the Magnetic, Magnetic Bodies and the Great Magnet Earth – 1600) is considered to be one of the first truly scientific texts.
Gilbert received his medical training in Cambridge and practiced as a physician in London. He became president of the College of Physicians and was physician to Queen Elizabeth I.

In the time of Elizabeth I and Shakespeare, England was still largely a place of superstition and religious fervor. Gilbert concurred with Copernicus, a potentially dangerous sentiment in an era when elsewhere in Europe others such as Giordano Bruno and later GALILEO were being persecuted (and in the case of Bruno, executed) for sharing the same opinion.

Magnetism was to cast its influence in the eighteenth century, displayed through the electric fluid of GALVANI and VOLTA.

He distinguished the properties of magnetism from the attractive effect produced by friction with amber. In so doing he introduced the term that was to become electricity.
He introduced a number of expressions to the English language including: magnetic pole, electric force and electric attraction.
A term of magneto motive force, the gilbert, is named after him.

Gilbert and others postulated that magnetism is the force holding the planets in their orbits.

The region around a charged object where it exerts a force is called its electric field. Another charged object placed in this field will have a force exerted on it. Coulomb’s rule is used to calculate this force.

Coulomb, a French physicist, made a detailed study of electrical attractions and repulsions between various charged bodies and concluded that electrical forces follow the same type of law as gravitation. Coulomb found a similar principle linking the relationship of magnetic forces. He believed electricity and magnetism, however, to be two separate ‘fluids’.
It was left to HANS CHRISTIAN OERSTED, ANDRE-MARIE AMPERE and MICHAEL FARADAY to enunciate the phenomenon of electromagnetism.

The SI unit of electric charge, coulomb (C), one unit of which is shifted when a current of one ampere flows for one second, is named in his honour.

He also articulated Coulomb’s rule of friction, which outlines a proportional relationship between friction and pressure.

Oersted discovered that an electric current could make the needle of a magnetic compass swivel. It was the first indication of a link between these two natural forces. Although Oersted discovered electromagnetism he did little about it. This task was left to AMPERE and FARADAY.

Another addition to the succession of ‘inverse-square’ laws begun with NEWTON’s law of universal gravitation.
Ampere had noted that two magnets could affect each other and wondered, given the similarities between electricity and magnetism, what effect two currents would have upon each other. Beginning with electricity run in two parallel wires, he observed that if the currents ran in the same direction, the wires were attracted to each other and if they ran in opposite directions they were repelled.

He experimented with other shapes of wires and generalised that the magnetic effect produced by passing a current in an electric wire is the result of the circular motion of that current. The effect is increased when the wire is coiled. When a bar of soft iron is placed in the coil it becomes a magnet. This is the solenoid, used in devices where mechanical motion is required.

Ampere exploited OERSTED’s work, devising a galvanometer which measured electric current flow via the degree of deflection upon its magnetic needle.

He attempted to interpret all his results mathematically in a bid to find an encompassing explanation for what later became referred to as electromagnetism (Ampere had at that time christened it electrodynamics), resulting in his 1827 definition.

Ampere’s name is commemorated in the SI unit of electric current, the ampere. 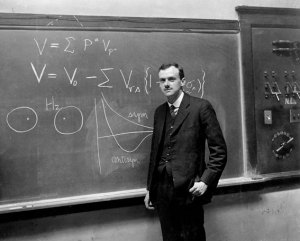 ‘A magnetic monopole is analogous to electric charge’

A magnetic monopole is a hypothetical particle that carries a basic magnetic charge – in effect, a single north or south magnetic pole acting as a free particle.

Until recently no one has observed a monopole.