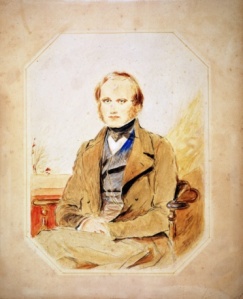 Organisms have changed over time and the ones living today are different from the ones that lived in the past. Furthermore, many organisms that once lived are now extinct.

The orthodox view was that of the Creationists. According to the Book of Genesis in the Bible, ‘God created every living creature that moves….’. Against this background, thinkers such as French naturalist Jean-Baptist Lamarck developed a picture of how species evolved from single-celled organisms.

Darwin’s breakthrough was to work out what evolution is and how it happens. His insight was to focus on individuals, not species and to show how individuals evolve by natural selection. The mechanism explained how all species evolved to become well suited to their environment. Later commentators have characterized this idea as ‘survival of the fittest,’ but this was never a phrase that Darwin himself used.

Darwin was influenced by CHARLES LYELL’s newly published book ‘Principles of Geology’, showing how landscapes had evolved gradually through long cycles of erosion and upheaval and by ‘An Essay on the Principle of Population’ written in 1798 by THOMAS MALTHUS.

The publication of Darwin’s book ‘On the Origin of Species by Means of Natural Selection’ in 1859 generated social and political debate that continues to this day. Darwin did not discuss the evolution of humans in this book.
In ‘The Descent of Man’, published in 1871, he presented his explanation of how his theory of evolution applied to the idea that humans evolved from apes. In modern form the theory contains the following ideas:

this means that there are variations within each population gene pool and individuals with most favourable variations stand a better chance of survival – the survival of the fittest.

there is thus a ‘natural selection’ for those individuals whose variations make them better adapted for survival and reproduction.

Knowledge of DNA has enriched the theory of evolution. The modern view is still based on the Darwinian foundation; evolution through natural selection is opportunistic and it takes place steadily.