Oersted discovered that an electric current could make the needle of a magnetic compass swivel. It was the first indication of a link between these two natural forces. Although Oersted discovered electromagnetism he did little about it. This task was left to AMPERE and FARADAY.

The Scottish physicist examined Faraday’s ideas concerning the link between electricity and magnetism interpreted in terms of fields of force and saw that they were alternative expressions of the same phenomena. Maxwell took the experimental discoveries of Faraday in the field of electromagnetism and provided his unified mathematical explanation, which outlined the relationship between magnetic and electric fields. He then proved this by producing intersecting magnetic and electric waves from a straightforward oscillating electric current.

In 1831 – following the demonstration by HANS CHRISTIAN OERSTED that passing an electric current through a wire produced a magnetic field around the wire, thereby causing a nearby compass needle to be deflected from north – MICHAEL FARADAY had shown that when a wire moves within the field of a magnet, it causes an electric current to flow along the wire.
This is known as electromagnetic induction.

In 1864 Maxwell published his ‘Dynamical Theory of the Electric Field’, which offered a unifying, mathematical explanation for electromagnetism.

In 1873 he published ‘Treatise on Electricity and Magnetism’.

The equations are complex, but in general terms they describe:

The equations predict the existence of electromagnetic waves, which travel at the speed of light and consist of electric and magnetic fields vibrating in harmony in directions at right angles to each other. The equations also show that light is related to electricity and magnetism.

Maxwell worked out that the speed of these waves would be similar to the speed of light and concluded, as Faraday had hinted, that normal visible light was a form of electromagnetic radiation. He argued that infrared and ultraviolet light were also forms of electromagnetic radiation, and predicted the existence of other types of wave – outside the ranges known at that time – which would be similarly explainable. 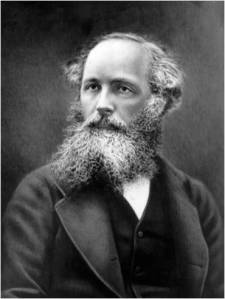 Maxwell undertook important work in thermodynamics. Building on the idea proposed by JAMES JOULE, that heat is a consequence of the movement of molecules in a gas, Maxwell suggested that the speed of these particles would vary greatly due to their collisions with other molecules.

In 1855 as an undergraduate at Cambridge, Maxwell had shown that the rings of Saturn could not be either liquid or solid. Their stability meant that they were made up of many small particles interacting with one another.

In 1859 Maxwell applied this statistical reasoning to the general analysis of molecules in a gas. He produced a statistical model based on the probable distribution of molecules at any given moment, now known as the Maxwell-Boltzmann kinetic theory of gases.
He asked what sort of motion you would expect the molecules to have as they moved around inside their container, colliding with one another and the walls. A reasonably sized vessel, under normal pressure and temperature, contains billions and billions of molecules. Maxwell said the speed of any single molecule is always changing because it is colliding all the time with other molecules. Thus the meaningful quantities are molecular average speed and the distribution about the average. Considering a vessel containing several different types of gas, Maxwell realized there is a sharp peak in the plot of the number of molecules versus their speeds. That is, most of the molecules have speeds within a small range of some particular value. The average value of the speed varies from one kind of molecule to another, but the average value of the kinetic energy, one half the molecular mass times the square of the speed, (1/2 mv2), is almost exactly the same for all molecules. Temperature is also the same for all gases in a vessel in thermal equilibrium. Assuming that temperature is a measure of the average kinetic energy of the molecules, then absolute zero is absolute rest for all molecules.

The Joule-Thomson effect, in which a gas under high pressure cools its surroundings by escaping through a nozzle into a lower pressure environment, is caused by the expanding gas doing work and losing energy, thereby lowering its temperature and drawing heat from its immediate neighbourhood. By contrast, during expansion into an adjacent vacuüm, no energy is lost and temperature is unchanged.

The explanation that heat in gas is the movement of molecules dispensed with the idea of the CALORIC  fluid theory of heat.

The first law of thermodynamics states that the heat in a container is the sum of all the molecular kinetic energies.
Thermal energy is another way of describing motion energy, a summing of the very small mechanical kinetic energies of a very large number of molecules; energy neither appears nor disappears.
According to BOYLE’s, CHARLES’s and GAY-LUSSAC’s laws, molecules beating against the container walls cause pressure; the higher the temperature, the faster they move and the greater the pressure. This also explains Gay-Lussac’s experiment. Removing the divider separating half a container full of gas from the other, evacuated half allows the molecules to spread over the whole container, but their average speed does not change. The temperature remains the same because temperature is the average molecular kinetic energy, not the concentration of caloric fluid.

In 1871 Maxwell became the first Professor of Physics at the Cavendish Laboratory. He died at age 48.