‘The notion of the indivisible particle’

Anaxagoras came from Ionia but settled in Athens, where he remained for thirty years and taught both Pericles and Euripides. Charged with impiety because of his theory that the Sun is a red-hot stone (such an explanation, denying the role of Helios the sun-god, was enough to warrant prosecution) he fled Athens before the trial and settled in Asia Minor.
What we know about Anaxagoras is based on references to him by later writers.

In the cosmology of Anaxagoras, the Universe began as a homogenous sea of identical basic particles. Nous gave this sea a stir, in the knowledge that in time the particles would so combine to arrange themselves such that everything would be as it is today. 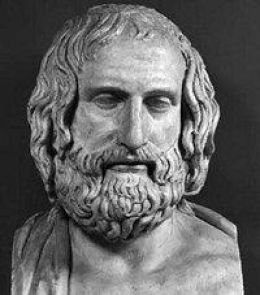 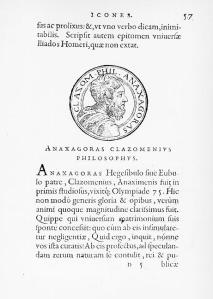 Nous was a vital principle akin to the life force of vitalism – the nearest English words being ‘mind’ or ‘intellect’.
The range of the word ‘nous’ is vastly greater, however, as it refers to the combination of insight and intuition which permits the apprehension of the fundamental principles of the cosmos – the concept is closer to the oriental idea of ‘seeing’ than the occidental notion of intelligence founded upon EUCLIDEAN LOGIC.

At the same time, Nous could be the creative, motive intelligence behind the cosmos, almost indistinguishable from the Christian concept of the will of God.

THE SEVEN SAGES OF GREECE
These pre-Socratics survive only in enigmatic fragments.

Periander of Corinth (died 585 BCE)  ‘Nothing is impossible to industry’

Bias of Prinene (sixth century BCE)  ‘Most men are bad’

In Athens of the fourth century BCE, empirical science held little appeal. Socrates had an aversion to natural philosophy.

PLATO celebrated mathematics but opposed any form of experimentation.
ARISTOTLE was more receptive to natural philosophy, but practiced little experimentation or even observation.