‘Galaxies are moving away from each other and us at an ever-increasing rate. The more distant the galaxy, the faster it is moving away’

This means that the universe is expanding like a balloon. The principle of an expanding cosmos is at the heart of astronomical theory.

Before 1930, astronomers believed that the Milky Way was the only galaxy in the universe. The discovery of Cepheid variables, which brightened and dimmed in a regular rhythm gave a clue as to the true size of the universe.

In 1923, Hubble spotted a Cepheid variable in the Andromeda Nebula, previously supposed to be clouds of gas. This led to the conclusion that Andromeda was nearly a million light years away, far beyond the limits of the Milky Way and clearly a galaxy in its own right. Hubble went on to discover Cepheids in other nebula and proved that galaxies existed beyond our own.
He began to develop a classification system, sorting galaxies by size, content, distance, shape and brightness. He divided galaxies into elliptical, spiral, barred spiral and irregular. These are subdivided into categories, a, b and c according to the size of the central mass of stars within the galaxy and the tightness of any spiraling arms.

The Earth’s atmosphere alters light rays from outer space; the Hubble Space Telescope, being above the atmosphere, receives images with far greater clarity and detail.
Construction began on the HST in 1977 and it was launched by the space shuttle discovery on 25 April 1990. The instruments can detect not only visible light but also infra-red and ultra-violet. Its camera can achieve a resolution ten times greater than the largest Earth based telescope.

Hubble noticed that the galaxies appeared to be moving away from the region of space in which the Earth is located. It appeared that the further away a galaxy was, the faster it was receding. The conclusion was that the universe, which had previously been considered static is in fact expanding.

In 1915, EINSTEIN’s theory of relativity had suggested that owing to the effects of gravity, the universe was either expanding or contracting. Einstein knew little about astronomy and had introduced an anti-gravity force into his equations, the cosmological constant. Hubble’s discoveries proved Einstein had been right after all and Einstein later described the introduction of the gravitational constant as ‘the biggest blunder of my life’.

Hubble’s discovery that the universe is expanding led to the development of the ‘big-bang’ model of the universe.

‘The maximum possible mass of a white dwarf star is 1.4 times the Sun’s mass’

The Chandrasekhar limit is a physical constant. It is the greatest mass a white dwarf star can have before it goes supernova, approximately 1.44 solar masses.
Chandrasekhar showed that it is impossible for a white dwarf star, which is supported solely by electron degeneracy pressure, to be stable if its mass is greater than 1.44 times the mass of the Sun. If such a star does not completely exhaust its thermonuclear fuel, then the limiting mass may be slightly larger.
Above this limit a star has too much mass to become a white dwarf after gravitational collapse. A star of greater mass will become a neutron star or a black hole.

‘The universe began when a single point of infinitely dense and infinitely hot matter exploded spontaneously. The debris of this explosion began to fly away from the explosion point and is still flying and will keep on flying indefinitely. All the galaxies, stars and planets were formed from this debris’

In 1927 the Belgian astronomer Georges Lemaitre (1894-1966) suggested that at some time in the remote past all the matter in the universe was concentrated at one point. The universe began when this ‘primeval atom’ exploded. This idea was further developed by Gamow, who predicted that leftover warmth from this explosion would still fill the universe. The name Big Bang was given to this theory by Fred Hoyle, who believed in the opposing steady-state theory. It was meant to be a put-down when Hoyle first used it scornfully on a radio talk show in 1950.

‘The universe has no beginning and will have no end. It is constantly producing matter and is expanding’

‘Most of the elements heavier than hydrogen in the universe are created, or synthesised in stars when lighter nuclei fuse to make heavier nuclei’

The Sun burns, or fuses, hydrogen to helium. This process occurs during most of every star’s lifetime. After a star exhausts its supply of hydrogen, the star burns helium to form beryllium, carbon and oxygen. When the star exhausts its supply of helium it shrinks and its temperature rises to 1000million degrees. The rising temperature triggers a new series of reactions in which carbon, oxygen and other elements combine to form iron and nickel. When the star has burned everything into iron and nickel, it explodes as a supernova. The elements heavier than nickel are formed during supernova explosions.

Hoyle proposed this theory in 1957. Hoyle, along with Thomas Gold and Herman Bondi, had also proposed the steady state theory of the origin of the universe in 1948.

After being invited to join the commission investigating the January 28, 1986 Challenger shuttle disaster by NASA, Feynman demonstrated his determination to remain an independent observer by publishing his own appendix to the report. Feynman added to the commission’s criticism of its system of management by finding that NASA’s own method of using statistics that showed the shuttle was safe was for two reasons. “ …an attempt to assure the government of NASA perfection and success in order to ensure the supply of funds. The other may be that they sincerely believed it to be true, demonstrating an almost incredible lack of communication between themselves and their working engineers…. For a successful technology, reality must take precedence over public relations, for nature cannot be fooled ”.

‘During the first moments of the big bang that marked the birth of the universe some areas were forced by the turbulence to contract, rather than expand. This could have crushed matter into black holes that ranged in size from a few micrometres to a metre (their masses ranging from a few milligrams to the mass of a large planet). This multitude of black holes may still exist’

Hawking sought to extend the existing General Theory of Relativity, uniting it with quantum theory by suggesting that mini black holes weighing up to billions of tons and having the size of a proton would thus be susceptible to gravitational laws and would also need to obey quantum laws. Implications of Hawking’s theory are a universe with no beginning or end, nor any boundaries to it at all. A mini black hole has not yet been detected nor is there any circumstantial evidence for their existence.

In 1974 Hawking proposed a mechanism by which black holes transform their mass into radiation and particles that leave the hole, with the result that they slowly evaporate. Hawking had noticed the similarity between the event horizon of a black hole and the second law of thermodynamics. The law says that an isolated system will always tend to gain entropy and become more chaotic, and if left to itself will never become more ordered. The surface of a black hole can only stay the same size or swell – it can never shrink or become more ordered. Heisenberg’s Uncertainty Principle formulated in 1927 shows that it is not possible to be certain of both an object’s momentum and its position at the same time, as the way of determining the question will distort either one or the other. On an everyday scale, this distortion is so small that it does not matter, but on the level of sub-atomic particles it is crucial and leads to quantum effects in which particles apparently ignore the rules of classical physics and jump and pop up seemingly at random. One astonishing aspect of Heisenberg’s Uncertainty Principle is what it says about empty space. It says there is no such thing as empty space, because empty space would be a precise state and there is no such thing as a precise state. To create what is probably empty space, pairs of ‘virtual’ particles must oscillate either side of the zero that is empty space. These pairs are positive particles and negative antiparticles. When they come together, they annihilate each other, but they are constantly moving in and out of space. 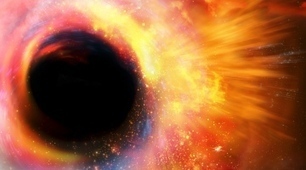 Hawking realised that this interchange of virtual particles was happening all along a black hole’s event horizon, which is an edge in space. Negative particles would be drawn into the black hole and positive particles pushed out. The negative particles are what stop the size of the black hole from ever decreasing. The expelled positive particles emerge as heat, miniscule – a few millionths of a degree above absolute zero – but in theory measurable. So black holes are not black, but emit heat radiation, which came to be known as Hawking radiation. The amount of Hawking radiation escaping from an evaporating black hole is inversely proportional to the square of its mass. Extra rotational energy is thought to be extracted from a black hole when its spin is slowed by the twisting of magnetic field lines close to its event horizon.

Hawking went further to suggest that just as just as a star losing radiation gradually dwindles, so a black hole would eventually evaporate into pure radiation.