Eudoxus flourished around the middle of the 4th century BCE; he was an astronomer initiated into the Egyptian mysteries, obtaining his knowledge of the art from the priests of Isis.

His work is passed to us through Aristotle.

Archimedes investigated the principles of static mechanics and pycnometry (the measurement of the volume or density of an object). He was responsible for the science of hydrostatics, the study of the displacement of bodies in water.

Buoyancy – ‘A body fully or partially immersed in a fluid is buoyed up by a force equal to the weight of the fluid displaced by the body’
The upthrust (upward force) on a floating object such as a ship is the same as the weight of water it displaces. The volume of the displaced liquid is the same as the volume of the immersed object. This is why an object will float. When an object is immersed in water, its weight pulls it down, but the water, as Archimedes realised, pushes back up with a force that is equal to the weight of water the object pushes out-of-the-way. The object sinks until its weight is equal to the upthrust of the water, at which point it floats.
Objects that weigh less than the water displaced will float and objects that weigh more will sink. Archimedes showed this to be a precise and easily calculated mathematical principle.

Syracuse’s King Hiero, suspecting that the goldsmith had not made his crown of pure gold as instructed, asked Archimedes to find out the truth without damaging the crown.

Archimedes first immersed in water a piece of gold that weighed the same as the crown and pointed out the subsequent rise in water level. He then immersed the crown and showed that the water level was higher than before. This meant that the crown must have a greater volume than the gold, even though it was the same weight. Therefore it could not be pure gold and Archimedes thus concluded that the goldsmith had substituted some gold with a metal of lesser density such as silver. The fraudulent goldsmith was executed.

Archimedes came to understand and explain the principles behind the compound pulley, windlass, wedge and screw, as well as finding ways to determine the centre of gravity of objects.
He showed that the ratio of weights to one another on each end of a balance goes down in exact mathematical proportion to the distance from the pivot of the balance.

Perhaps the most important inventions to his peers were the devices created during the Roman siege of Syracuse in the second Punic war.

He was killed by a Roman soldier during the sack of the city.

‘All circles are similar and the ratio of the circumference to the diameter of a circle is always the same number, known as the constant, Pi’

The Greek tradition disdained the practical.  Following PLATO the Greeks believed pure mathematics was the key to the perfect truth that lay behind the imperfect real world, so that anything that could not be completely worked out with a ruler and compass and elegant calculations was not true.

In the eighteenth century CE the Swiss mathematician LEONHARD EULER was the first person to use the letter  Π , the initial letter of the Greek word for perimeter, to represent this ratio.

The earliest reference to the ratio of the circumference of a circle to the diameter is an Egyptian papyrus written in 1650 BCE, but Archimedes first calculated the most accurate value.

By going from hexagons to polygons with 96 sides, he could narrow the margin for error considerably. In the same way he worked out the approximate area contained by all kinds of different curves from the area of rectangles fitted into the curve. The smaller and more numerous the rectangles, the closer to the right figure the approximation became. 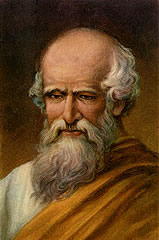 This is the basis of what thousands of years later came to be called integral calculus.
Archimedes’ reckonings were later used by Kepler, Fermat, Leibniz and Newton.

In his treatise ‘On the Sphere and the Cylinder’, Archimedes was the first to deduce that the volume of a sphere is 4/3 Pi r3  where r  is the radius.
He also deduced that a sphere’s surface area can be worked out by multiplying that of its greatest circle by four; or, similarly, a sphere’s volume is two-thirds that of its circumscribing cylinder.

Like the square and cube roots of 2, Pi is an irrational number; it takes a never-ending string of digits to express Pi as a number. It is impossible to find the exact value of Pi – however, the value can be calculated to any required degree of accuracy.
In 2002 Yasumasa Kanada (b.1949) of Tokyo University used a supercomputer with a memory of 1024GB to compute the value to 124,100,000,000 decimal places. It took 602 hours to perform the calculation.