Despite his many achievements, it is arguable that the most important factor influencing the legacy of Edmund Halley is his friendship with Newton.
He encouraged Newton to undertake the ‘Principia’ in the first place; he went on to edit and proof read the text, write the preface and to finance its publication in 1687.
Had Edmund Halley not been born, his comet would still exist, albeit under a different name. Newton’s Principia, at least in the form the world knows it today, almost certainly would not. 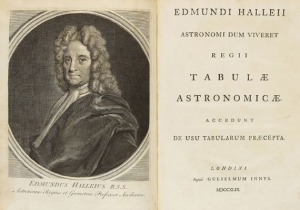 Halley was a prolific mapmaker, showing prevailing winds, tides and magnetic variations in his cartography.

Halley’s Comet will return to the skies in 2062.