A Swede educated in Russia, France and the United States, Alfred Nobel was a chemist who set up a factory to manufacture the relatively unstable nitro-glycerine to serve the civil-engineering market. After a disaster in 1864, Nobel found a way to stabilise the liquid explosive with kieselguhr, which he called dynamite. He went on to develop blasting gelatin, ballistite and a series of detonators.

The success of Nobel’s dynamites was compounded by his holdings in oil, leading to vast personal wealth. He left much of his fortune to funding the establishment of a series of awards, one of which included an accolade for peace.
There was another dedicated to literature, with the remaining three presented for achievements in the sciences. The first Nobel prizes for medicine (or physiology), physics and chemistry were awarded in 1901.

The prizes are awarded annually, according to the terms of Nobel’s will; ‘to those who, during the preceding year, shall have conferred the greatest benefit on mankind.’ 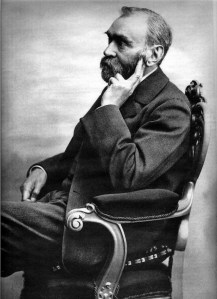